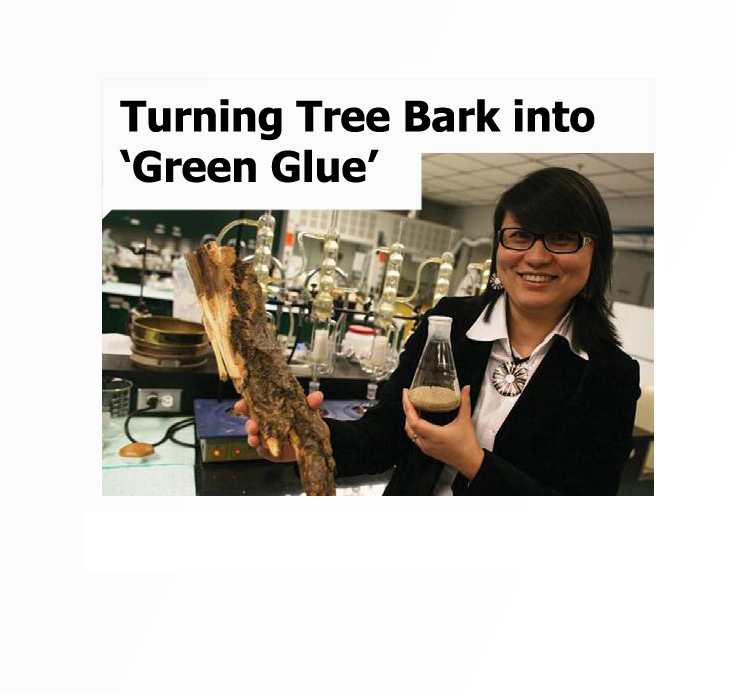 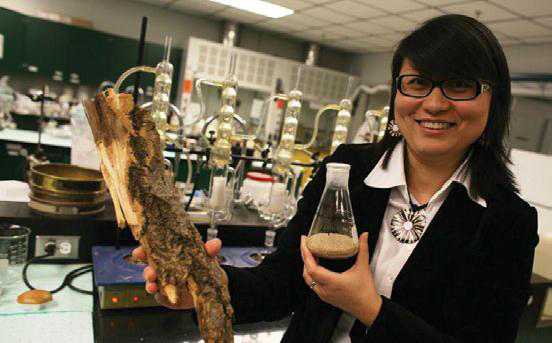 Dr. Ning Yan holds a piece of bark and the bark-based adhesive that can be used as a replacement or alternative to conventional glues.
When we think of products derived from tree bark, we often think of birch bark canoes, black ash baskets, cedar mulch or most often the pop from uncorking a bottle of wine. Yet there are millions of tonnes of tree bark residues building up as waste piles near sawmills. The quest for commercialization to use tree bark at a broad scale has proven difficult.

That is until now. Where others saw waste, Dr. Ning Yan saw an opportunity.

Dr. Yan, a professor from the Faculty of Forestry and the Department of Chemical Engineering and Applied Chemistry at the University of Toronto, has spent the better part of a decade thinking about how to better utilize tree bark. Along with the Bark Biorefinery Project team, she is transforming tree bark, a forest industry waste stream, into a green alternative for petroleum-based glues and adhesive. With this innovative, eco-friendly product, capable of playing a role in climate change mitigation, we’d say she’s barking up the right tree! “When you consider the basic anatomy of a tree, the bark is the first line of  defence. Bark has naturally occurring chemicals with antifungal or antioxidant properties, which  ultimately protect the tree,” said Dr. Yan. “I just thought there must be an opportunity to make use of the chemical properties of bark, and transform this traditional waste stream into a good product with added  value.”

The research team at the Bark Biorefinery Project.
Passionate about the potential of tree bark, Dr. Yan now leads the Bark Biorefinery project. The project focuses on utilizing bark, a residue from forest mills, to develop eco-friendly products with a large market potential. In the simplest terms, various products have been developed through an extraction technique, which removes the chemical compounds from bark, and converts it into adhesives, foams, epoxies, and other industrial materials. One of the most promising products for industrial application is the  development of a bark-based adhesive that can be used as a replacement or alternative to conventional glues. 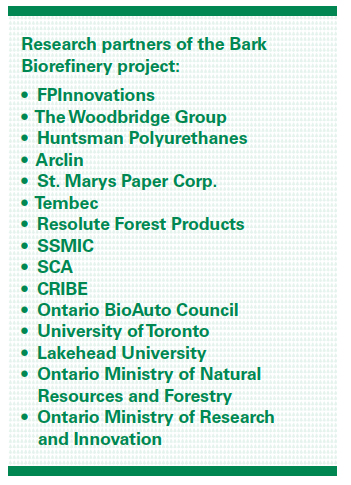 For the most part, commonly used glues and adhesives for building materials, such as plywood, particleboard, and oriented strand board are derived from fossil fuels—a carbon intensive material and greenhouse gas emitter. While these traditional glues have served an important role in developing more durable wood products that have allowed for revisions to building codes that accommodate more wood structures, the long-term sustainability of any petrochemical-based product comes into question.

“We’ve seen a lot work focussed on the sustainability of using more wood as a building material, but we haven’t seen as much work on green alternatives for manufacturing materials, like glues and epoxies. We’re creating a product that will make wood products even greener.”

In addition to the environmental benefits of this ‘green glue’, it has also demonstrated performance advantages, and in certain cases, outperforms traditional glues. In collaboration with industry partners, researchers at The Bark Biorefinery performed a pilot extraction to test both adhesives. Martin Feng, principal scientist in the wood products division at FPInnovations, discussed the results. “We found that bark-based adhesives could replace up to 20% of the petrochemical-based adhesives using current processing practices. This is all while being cheaper and greener. When tested, bark based adhesives performed similarly to traditional non-renewable adhesives.”

Researchers at the Bark Biorefinery further collaborated with FPInnovations to perform an economic analysis looking at the feasibility of producing this adhesive with an extraction plant beside a pulp mill, and if the bark of certain species performed better.

“Our analysis showed that softwood species tend to be better for creating the bark-based adhesive. We are sure there may be species in other countries with unique characteristics suitable for creating glues, but we wanted to focus on typical residues that can be collected from Canadian mills,” explains Dr. Yan.

While the results are positive from the environmental, economic, and performance perspective, large-scale commercialization remains to be a sticky situation.Without a stable source of bark extractives, it is difficult for a company to produce the adhesive, but without the demand for the extractives from a company, it is difficult for a mill to invest in such a facility. This challenge is all compounded by the precarious nature of petroleum prices. With recent drops in the price of oil, the cost of non-renewable adhesives remains relatively low. For now, the research team at Bark Biorefinery hope to create partnerships between mills and adhesive producers to promote the commercialization of this bark-based adhesive.

“We’ve had some challenges with getting some of these bio-based materials to the marketplace, especially since the drop in oil—there’s been a little less incentive to change,” says Dr. Yan. “But if you think in the long run, the future has to be green. Green chemicals will be the way of the future!”