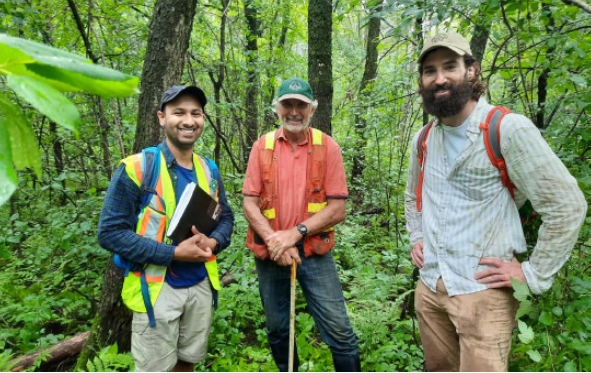 Article written for The Ontario Woodlander, Issue 104 (September 2021), a publication of the Ontario Woodlot Association where Shan Shukla interned for his Master of Forest Conservation program.

Conifer plantations in Southern Ontario were introduced in the early 20th century to help improve the state of our rapidly eroding soils. Plantations on public lands have generally been effectively managed by the provincial government, and conservation authorities. However, those on private lands have been largely neglected, and they exist now as hundreds of thousands of hectares of fragmented and orphaned plantations. The main reason for this situation stems from the cost to perform forest management activities on these private forests. Other reasons include a lack of knowledge amongst landowners, as well as constant changes in ownership in some cases. 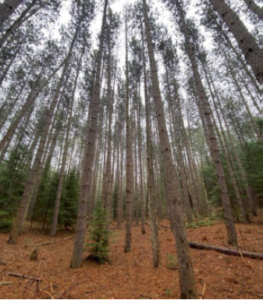 An example of an approximately 70-year-old Red Pine plantation in the Fleetwood Watershed in need of a first thinning.

The Ontario Woodlot Association (OWA) is currently working with forest landowners in Huronia and Fleetwood (Kawartha) to undertake two community forest owners cooperative pilot projects, which will help to reduce the cost of managing their woodlots, and foster a more robust base of knowledge and understanding for these landowners. Economies of scale will be built around geographic clusters of properties where best management practices are collectively applied to help bring down overall costs. By combining individual small parcels of plantations into this larger unit, the total area available to manage and harvest becomes more attractive and viable for forest service providers including prescription-writers, tree markers, harvesting contractors, and ultimately to mills.

Being a widely connected non-profit organization, the OWA holds a wealth of knowledge in woodlot management along with many valuable connections within the forest sector. With its longstanding knowledge and far-reaching networks, the OWA can facilitate and help over-see the management, harvesting, and subsequent sale of timber from private woodlots formed as cooperatives.

Forest cooperatives have seen success internationally and closer to home in Nova Scotia and Quebec, along with others south of the border, and out west. These successful cooperatives have served their communities for years, sometimes decades. Their mission statements include performing forest management in a sustainable fashion, with ecosystem resilience at the forefront. They also focus on supporting and advocating for local economies, community education, and democratic management. These core values stem from the three pillars of sustainable forest management encompassing economic, social, and ecological considerations.

Most of the woodlots of interest are red pine plantations established many de-cades ago and are in need, or overdue for a first thinning. The pilot projects will help in strengthening existing and potentially developing new markets for fibre resulting from this initial thinning, while subsequent thinnings are expected to yield higher economic returns to landowners.

“Returns from managed woodlots throughout the years will only increase with growth, resulting in more revenue to landowners” – Eleanor Reed (RPF, OWA Kawartha Chapter President). If successful, there will be potential to create more of these markets in Ontario and include other key members such as Indigenous landowners, First Nations, and Community Forests. 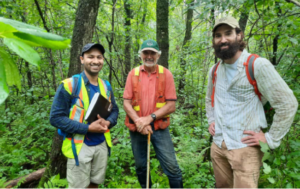 Myself (left) along with Art Shannon (centre) and my colleague (Ben Gwilliam) on the right taking inventory of an overgrown plantation in Southern Ontario.

Ecologically, these projects will serve as the catalyst to initiate and sustain widescale improvement of woodlots through the transition from red pine monocultures to more native, mixed-wood stands. These resulting mixed-wood plantations will exhibit better health, and resiliency to future climatic changes, invasive elements, and pests. In fact, the Kawartha Land Trust has partnered with the OWA to achieve increased biodiversity in their plantations. One Landowner in the Fleetwood area noticed that: “When I walk through the reforested pines, there are no birds, or animals. I want to create a more diverse forest so that birds will nest and live in this forest, as well as the ones around it… Also having many different types of trees will help reduce the risk of pests killing off the entire forest, reduce the risk of fire damage, and improve the soil, as it will not be as acidic with leaves falling instead of needles. I have made some attempts to do these things on my own. But having the OWA with all of their contacts, knowledge, access to seedlings, etc. makes it so much more likely that the project will be a complete success”

Equally valuable will be an educational component where the OWA will provide re-sources such as educational videos, and guidance from forestry professionals to educate landowners. This will allow them to be more knowledgeable stewards of their ecologically significant lands.

As a student with the Master of Forest Conservation program at the University of Toronto, I have joined the pilot project as an impartial, third party to objectively evaluate the success of the pilot projects. My involvement will help the OWA in determining whether the cooperative projects are sufficiently rigorous and viable to continue and potentially see adoption in other parts of Ontario. The cooperative models developed by the OWA will be looked at through a holistic lens, and compared alongside other programs that have seen successes and struggles. By combining these metrics with the economic and ecological outcomes out of Huronia and Fleetwood, a conclusive evaluation can be made to determine the health of this cooperative and its future potential.

Click here to read the full issue of The Ontario Woodlander, Issue 104