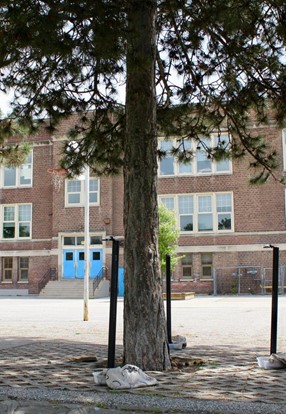 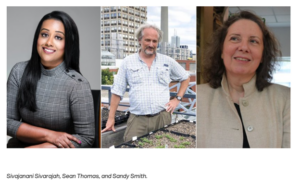 The shade of a tree is a welcome relief on a sunny day, but not all tree shade is the same. A recent study by three scientists at the Daniels Faculty’s Institute of Forestry and Conservation has found that certain tree species are better than others at blocking the sun’s invisible UV radiation, which causes sunburn and skin cancer.

The study, the first of its kind to be conducted in the northern hemisphere, was co-authored by Sivajanani Sivarajah, currently a Brock University postdoctoral fellow and Daniels Faculty sessional lecturer; Sean Thomas, a professor of forestry at the Daniels Faculty; and Sandy Smith, director of the Institute of Forestry and Conservation. It was published in Urban Forestry and Urban Greening.

During the summer months of 2015 and 2016, Sivarajah, Thomas, and Smith used logging dosimeters — digital devices equipped with light-sensitive sensors — to measure the amount of UV radiation in the shady areas underneath specimens of 16 different tree species in 13 different Toronto schoolyards and public parks.

The focus on schoolyards and play areas was intentional. The study was supported in part by the Toronto District School Board. “They wanted to delve more deeply into why trees are good to have on school grounds, and how they can manage that school-ground forest effectively for a variety of benefits,” Thomas says.

The dosimeters were configured to measure only the specific wavelengths of UV light that can harm human skin. By comparing the UV values gathered from underneath the trees with values gathered from dosimeters that were placed out in the open, away from any trees or buildings, the study’s authors were able to calculate the amount of UV radiation that each tree’s foliage prevented from hitting ground level. This measurement is important because it’s an indicator of how a good a tree is at filtering out the most harmful parts of the sun’s light spectrum. 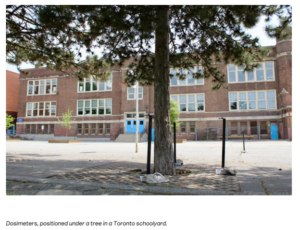 After performing a statistical analysis on their data, Sivarajah, Thomas, and Smith were able to assign a “protection factor” number to each of the 16 tree species they studied. The numbers, an average of the amount of protection offered by trees of each species, are equivalent to the SPF ratings on bottles of sunscreen.

The most protective species was the Norway maple, with a protection factor of 3.39. In other words, if a person spent 3.39 hours in the shade of an average Norway maple, they would absorb the same amount of UV radiation as a person who spent just one hour in full sunlight. Greater UV exposure means more severe burns and a higher risk of long-term effects, like cancer.

But Norway maple is an invasive species, considered a scourge by environmentalists because of its ability to crowd out other tree species in Ontario’s forests. Sivarajah cautions that the study should not be interpreted as license to plant trees only for UV protection, without regard for ecological consequences. “When we are planting trees, we want to base it on multiple objectives,” Sivarajah says. “We want to make sure they are non-invasive species that promote habitats for other species.”

Among the trees the study identified as providing excellent UV protection are a few native species, like horse chestnut (protection factor 2.89) and swamp white oak (3.05), either of which might be used as an alternative to Norway maple.

The least protective of the studied tree species was red maple, with a protection factor of 1.31.

The disparities in UV protection between different tree species are related to the differences in the way the different species’ branches and leaves are arranged. The study found that the most protective trees were the ones with the widest, least transparent crowns.

Although this particular study only covered 16 species, the authors believe that their data on crown geometry and transparency could be used to estimate the UV protection factors of other types of trees. The study’s findings could have applications in fields like urban design and landscape architecture.

“If you’re a landscape architect and you’re designing a space, then having better information on the functional aspects of trees is going to be a good thing,” Thomas says. “Knowing which tree species are most effective at blocking UV radiation would be very useful in designing a healthy environment.”

The Leaflet: FGSA’s monthly newsletter (May 2021)

Forestry Alumni appointed to Forests Ontario’s Board of Directors