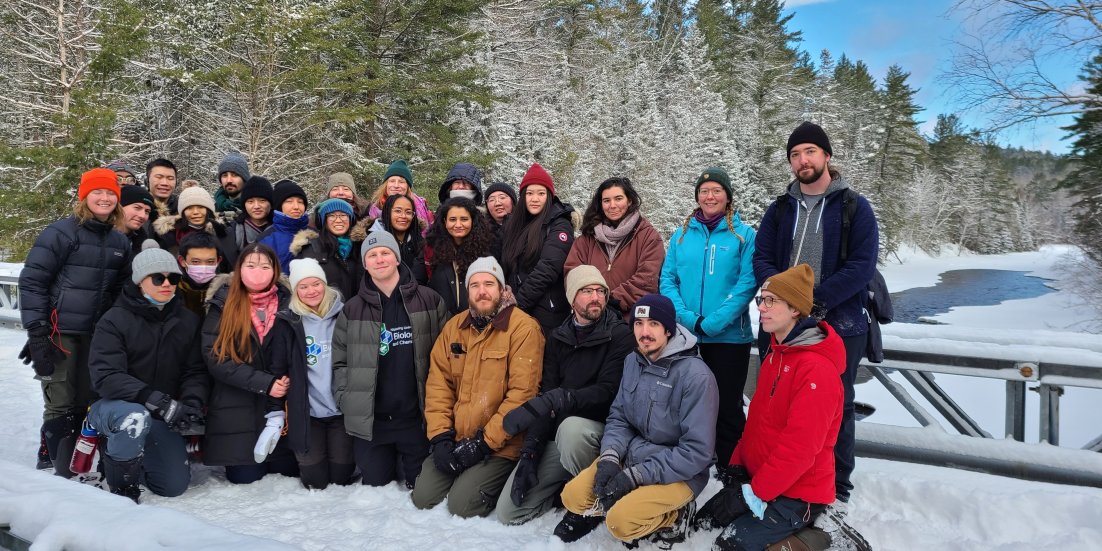 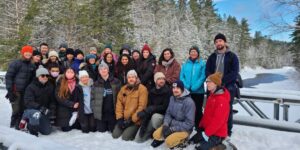 On a chilly but bright February morning, Daniels Faculty students and instructors traveled to the Canadian Ecology Centre (CEC) in northeastern Ontario to resume what had been until last year an annual rite of passage for the Master of Forest Conversation (MFC) program. The Mattawa winter field camp, put on pause last year because of the pandemic, was back on schedule with the support of several local and forestry organizations.

The four-day camp started on February 24 and concluded on February 27. It featured a full slate of activities, presentations, tours and on-the-ground learning opportunities for the 22 MFC students who attended. They were accompanied by Sandy Smith, Anne Koven and Tony Ung, along with many Forestry alumni working as foresters, private land owners, research scientists and representatives of the various organizations who helped put the camp together. The group was also joined by two students visiting from Finland.

Located in Samuel de Champlain Provincial Park, about four hours north of Toronto by car, the CEC is a non-profit outdoor and environmental education facility. It is also home to the Canadian Institute of Forestry (CIF), one of the organizing partners of the camp. The mission of the CIF, the national voice of forest practitioners since 1908, includes advocating for the forestry industry, building competency within forestry professionals, and fostering public awareness of Canadian and international forestry issues.

The group departed for the CEC on the first day of the camp. On the way there, attendees stopped at the intensively managed pine forest owned by Tim Bryson and his family in Sunridge, Ontario. Bryson provided lunch to the group, and then a tour of his forest and the various operations there. Afterward, the group drove to the CEC, where it was given an overview of the CIF, followed by an evening meet-and-greet with members of the Ontario Professional Foresters Association. 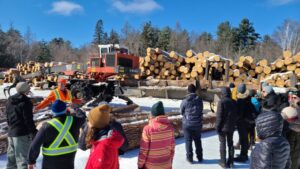 Day two of the camp started early with an overview of the Nipissing Forest Resource Management and then a tour of the Nipissing forest, which included stops featuring a uniform shelterwood site and an active harvesting operation site. After lunch, the group embarked on a tour of Green Legacy Farms, owned by Dean Assinewe, where they snowshoed around beehives and learned about his goals of aligning the practices and plans of his private woodlot with traditional Indigenous values. The evening featured more presentations, a campfire and a wolf howl (optional) with the CEC’s general manager, Bill Steer. 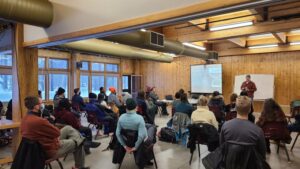 Scott McPherson gives a presentation on Nipissing Forest Resource Management before the group tours the forest as the first activity on the second day of the camp. (Photo by Tony Ung)

Day three, which was the most packed day of the camp, began with a trip to the Petawawa Research Forest (PRF). Over the course of three hours, PRF staff and volunteers gave an extensive tour of the research forest’s various study areas and operations, including its history of helping with contemporary challenges such as climate change. Lunch was provided in the silviculture building, where the camp participants were also given a presentation on forest management.

Following lunch, the group ventured on a hike that involved a hardwood trail, an arboretum and a tree marking site. A couple of hours after that, they boarded a bus to visit the Deep River public library, where they were given a presentation on the Algonquin Forestry Authority.

The day winded down with a traditional lumberjack six-pie supper at the CEC, after which the group was serenaded by Steer and John Pineau (executive director of the Ontario Woodlot Association) with a campfire singsong about the history of Mattawa.

“The tradition of the MFC class visiting [us for the winter field camp] is close to 25 years old,” Pineau, one of the core organizers of the camp, wrote in the newsletter The Howler. “Thanks to the financial and volunteer support of many, it continues to give the students an excellent opportunity to see top-notch forestry operations and world-class research, plus have a lot of fun too!” 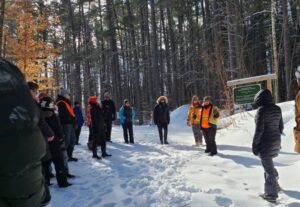 Petawawa Research Forest staff showed the camp participants the different studies and forest management approaches undertaken at the forest, including this research plot.

On the fourth and final day of the camp, the group was given a presentation of the traditional forestry data collection tools at the CEC. Their last activity before leaving for Toronto in the afternoon was a tour of the Fur Harvesters Auction Housein nearby North Bay, Ontario. 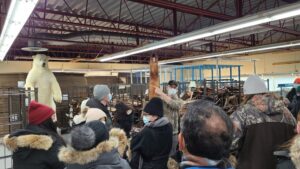 The group marvel at the life-size mount of the polar bear at the Fur Harvesters Auction House on the final day of the camp before heading back to Toronto. (Photo by Tony Ung)

“It was gratifying to see ‘seasoned’ foresters and technicians passing on their knowledge of silviculture, forest health and tree marking to forestry students,” Koven wrote in her thank-you note to the CEC, Pineau and the rest of the camp’s supporters. “The Mattawa field camp demonstrated sustainable forestry in action.

“It gave enormous opportunities for our students to experience forestry operations, to appreciate the skill of skidder and other machinery operators, and to hear the pride of the business owners.”