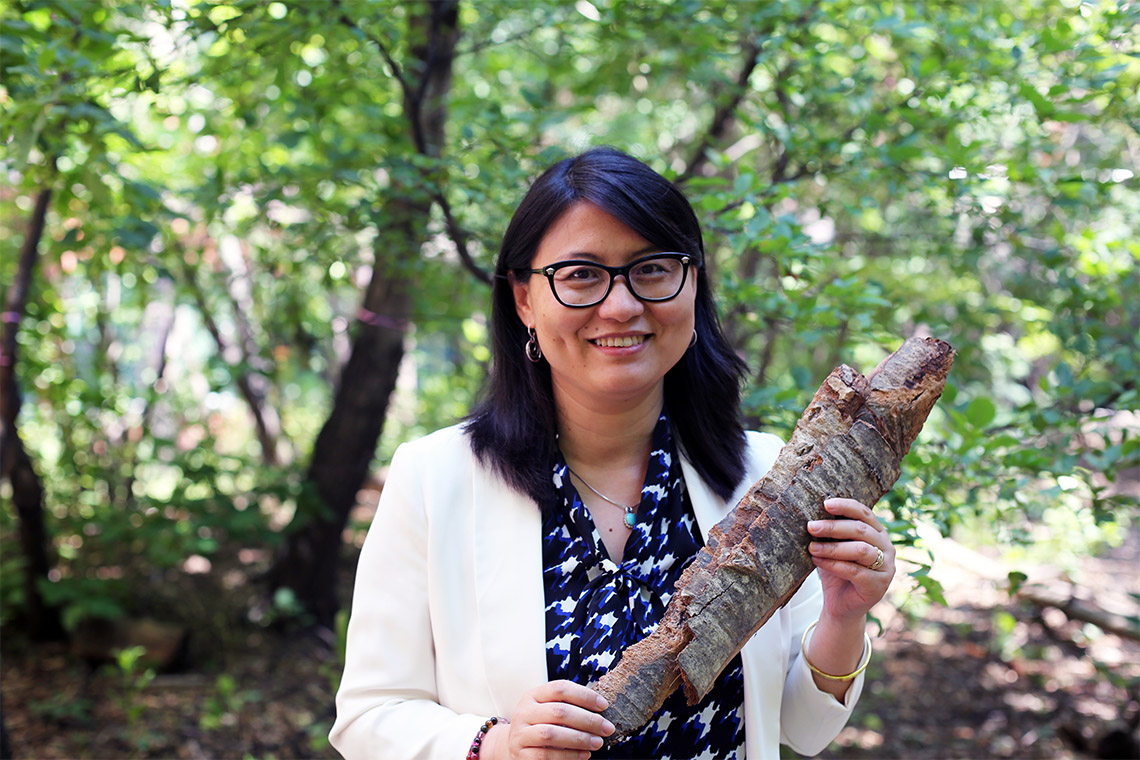 The Institute of Forestry & Conservation’s cross-appointed Professor Ning Yan is feature in U of T News. 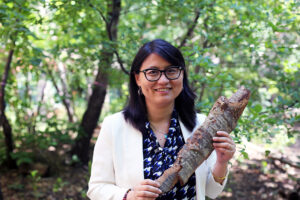 U of T’s Ning Yan and her collaborators in the Low-Carbon Renewable Materials Centre are developing a new generation of products made from forestry biomass, including underutilized materials such as tree bark. (Photo: Tyler Irving)

Canada’s forests are a key source of renewable materials, from paper to lumber. Yet many of the industry’s most common products, such as cardboard and newsprint, are on the low end of the value chain.

It’s a shortcoming the University of Toronto’s Ning Yan aims to rectify.

“The analogy we use is to a petroleum refinery, where the crude oil feedstock is made into thousands of different products, from lower-value fuels to higher-value commodity chemicals,” says Yan, a professor in the department of chemical engineering and applied chemistry in the Faculty of Applied Science & Engineering. “We can do the same with our renewable resources, such as forest biomass.”

Yan is the director of the newly formed Low Carbon Renewable Materials Centre (LCRMC) at U of T Engineering, which is supported by the dean’s strategic fund. LCRMC researchers work closely with forestry companies and industry associations to transform forest biomass – including materials that today are discarded as waste – into commercially valuable products.

In some cases, the new products would be the same as those that currently come from fossil fuels, enabling more oil to stay in the ground. In others, they could be combined with fossil-fuel derived products to enhance their performance.

Much of Yan’s research focuses on tree bark, which she believes is currently underutilized in pulp mills.

“Right now, bark is typically burned as a low-grade fuel in order to generate energy,” says Yan, who is cross-appointed to the department of forestry at the John H. Daniels Faculty of Architecture, Landscape, and Design. “But from an engineering perspective, it contains all kinds of unextracted value.”

One example is epoxy resins, a group of chemicals that are widely used in industrial-strength adhesives and composites.

“Epoxies are used in everything from flooring to airplane composites,” says Yan. “One of the key chemical building blocks of epoxies is bisphenol A (BPA), which industry would like to phase out because of its potential health impacts.”

Yan and her team have shown that bark extracts can be used to make a BPA-free epoxy resin. Like the traditional product, bark-derived epoxy resin can be mixed with a hardener to create an industrial-strength adhesive. 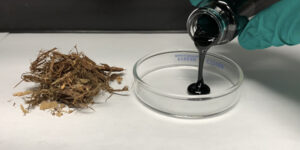 Made from oil extracted from bark and mixed with CO2, this cyclic carbonate is a precursor for polyurethane, a common form of plastic with a wide range of everyday uses (photo by Heyu Chen)

Another recent line of research involves polyurethanes, a class of polymer chemicals that are used in an array of products, including couch cushions, synthetic clothing and even house insulation. As with epoxies, polyurethanes are made using ingredients with potentially negative health impacts.

“Most commercial polyurethane foams are made using isocyanate, which is a toxic chemical,” says Yan. “Even worse, isocyanate is made from phosgene, which is even more toxic – so much so that it was used as a chemical weapon using the First World War.”

Last month, the team published a new method for making different kind of polyurethane precursor. Shape-memory polyurethane (SMPU) is used in mattresses, shoes and many other products. Yan and her team created a new form of SMPU from abietic acid, a chemical extracted from tree bark. 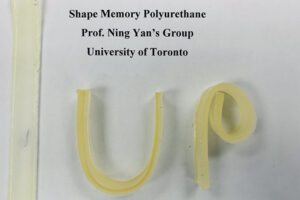 These samples of shape-memory polyurethane (SMPU) are made from abietic acid, a chemical extracted from tree bark (photo by Pitchaimari Gnanasekar)

While the proof-of-concept studies are encouraging, Yan says that there is still some distance to go before the products can be commercialized.

“There are still some challenges with respect to performance, especially in terms of strength,” says Yan. “We also have to consider how these chemical processes will be scaled up so that they can be implemented on an industrial scale.”

LCRMC researchers are working with players along the value chain, from polymer foam companies such as Woodbridge to pulp and paper companies such as Domtar, as well as organizations focused on research and development such as FPinnovations.

Together they aim to create new pathways to translate their innovations into full-scale applications.

Says Yan, “I see this as an opportunity to develop a greener, more sustainable economy.”

U of T News