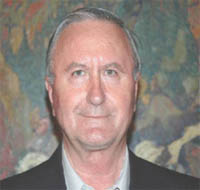 John’s main research interest concerns material science, with a focus on natural fibre composites, and recycling of wood, paper and plastics. During the 90s, he led a team of interdisciplinary researchers at U of T to develop a new class of high value composite products from waste wood and agricultural fibres, and thermoplastic polymers. His R&D was supported by the Ontario Centers of Excellence program (first by OCMR and later by MMO), NSERC, Forestry Canada and several private sector firms. Currently he is collaborating in composite research in Auto 21, one of the National Networks of Centres of Excellence. Since 1990, with colleagues from Canada and the US , John has been one of the key organizers of annual international conferences on Woodfibre-Plastic Composites in Toronto and Madison . During his academic career, John supervised the research of 58 graduate students, eight Post-Doctoral Fellows, and he authored 125 scientific and technical publications. He holds four patents on composites. During the past 38 years, he acted as a consultant and advisor to several private sector companies, government departments, legal firms and international aid agencies.

With support from the University of Toronto’s Office of Development, recently John spearheaded a successful campaign to raise major funding for the first endowed chair in Wood Science in the Faculty of Forestry. In addition, he raised funds for five endowed scholarships. In 2002, John was awarded an Honorary Doctoral Degree from the University of West Hungary, Sopron, Hungary, the same institution where he began his academic career 50 years ago as a student.