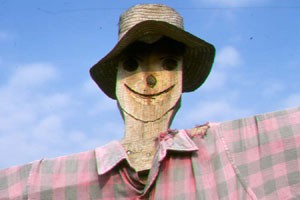 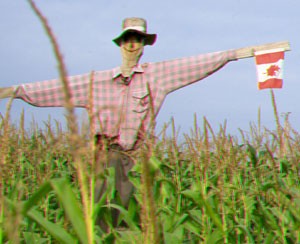 This scary scarecrow was placed in a corn field to scare the crows and other seed-eating birds from eating the corn seed when planted, and the seed in the corn cobs when mature.  It represents our cultural heritage of farming, including the songs, stories and art born on the farm.

Scary Scarecrow is the name of both the scarecrow and the song it sings.  The refrain to the song was written and composed as a lively dance.

Scary Scarecrow sings and dances in a corn field beside Highway 400, about halfway between Toronto and Barrie, Ontario, Canada.  In year 2005, it is located in a corn field about 1 kilometer north of the junction of Highway 400 and Simcoe Road 88, on the east side.

The Scary Scarecrow song was composed with lyrics by Paul Aird of Inglewood, Ontario, and music composed by Luke Mercier of Toronto, Ontario.  Mary Lambert, a family entertainer and Juno Award Nominee from Kingston, Ontario, sings the song on her compact disc titled Swinging on a Star.  Contact Mary at her web site http://marylambertmusic.com

Both children and adults love to sing and dance with Scary Scarecrow.  Here are the lyrics, and a recording of the first stanza and refrain of the song.

Click to hear Scary Scarecrow.   The first time you hear this song, it may stop and start repeatedly, until it is transferred to your computer.  The next playing of Scary Scarecrow should be perfect.  It’s a delightful song.

I know the changing seasons by the pathway of the sun

Scare a crow – tilt your arms

Scare a crow – twirl around – and tip your hat!

Scare a crow – tap your feet

Scare a crow – tilt your arms

Scare a crow – twirl around – and tip your hat!

I know my corn is happy in a gentle summer rain

I know my friendly shadow leaves no mark upon the ground

I know my friendly shadow likes to follow me around 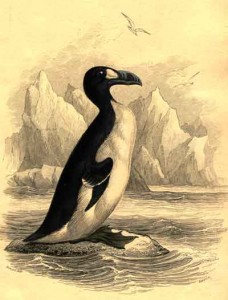 of a flightless species

Prelude to The Great Auk Cycle:  Vocalise (nown, rhymes with legalese) is a vocal composition consisting of a melody without words.  Vocalises are often used as a vocal exercise.  The Great Auk Cycle is imagined as a collection of vocalises sung by different women to commemorate the life of the last female of the Great Auk species.  Each vocalise to be included in the cycle will be sung by its composer, unaccompanied by other sounds.  The author of this prelude would be delighted to hear the vocalises created in response to his poem ¾ contact kite_hill@hotmail.com.  Some of these vocalises may be reproduced on this web site titled www.loonsforever.com, but only with the permission of the copyright holder.  Note that the Great Auk once lived on islands off Massachusetts, Maine, Québec, Newfoundland and Labrador, Greenland, Iceland, Scotland and Ireland.  The name “Auk” may have been derived from the Great Auk’s song, which was silenced before its voice could be recorded.